This is the second part of this two-part story. You can read the first part here.

At the door to the four-berth cabin they pause, wondering who will be in the bottom bunks, destined to sleep beneath them. He cracks the door open and shuffles in. She peers over his shoulder. A pale wedge of light reveals one empty bed and one filled with the vast body of the freedom thief. His chest expands and his hairy arm flops freely to the floor.

“Come in my bunk?” Eddie whispers.

Chloe looks at the unconscious man. She nods.

They climb with stealth then tumble into the top bed, out of sight of disapproving eyes.

Starlight rushes in through the open window as the train snakes towards the Himalayan foothills. Up in the tiny bunk, made for one, two hot bodies share breath in the close heat of the Indian night.

“We don’t have to go home,” Chloe whispers. “To have a baby,” she adds, just in case she is imagining the moment that’s passed between them.

“That’s true,” Eddie says quietly. “We could have one anywhere.”

Below, they hear the man’s greedy breaths, sucking and sighing with the rhythm of the train’s sways. Above, the lovers take their muffled revenge, stealing back their freedom. Knees and elbows lift and sink beneath a white sheet, washed soft between a thousand sleepers. Sweaty limbs shift on the thin mattress, skin tapping out a click-and-pop rhythm on hot sticky leather. Then their sighs mingle with the shh-shh white noise of the fast night air beyond the glass as their bunk is carried on, ever forward, towards its inevitable destination. 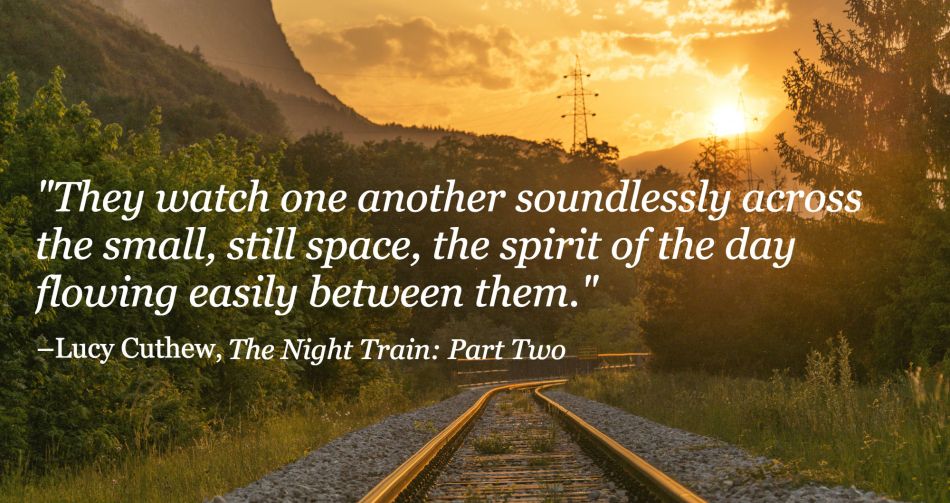 The train slows to a stop and orange station-light spills onto the shared pillow, revealing their sweaty faces to one another, glowing with rebellion. The man below coughs into the sepia silence and they freeze. They daren’t breathe. They lie still, willing laughter to stay away, which only welcomes its tickling fingers to their bare bellies.

“Me too,” Eddie whispers.

They stifle their snorts and press their faces into the pillow, willing the train to move again and secrete their intimacy in the whooshing darkness.

Finally the train pulls out of the station and carries them back into the night of the nearing mountains. As the rocking rhythm returns they see the hairy arm take its sleepy loll once more. They climb down, bladders bursting, and bundle into the cramped toilet together. She squats and wets the rushing tracks beneath with a shudder of relief.

“A woman once had a baby on one of these toilets,” she says. “It fell right onto the tracks.”

He raises his eyebrows.

“It survived,” she adds.

Eddie laughs and nods, “We can go home anytime.”

Back in the carriage they crawl into their own bunks. They watch one another soundlessly across the small, still space, the spirit of the day flowing easily between them. Soon the side-to-side and clickety-clack rocking brings their eyelids down. Their gaze splits in two and they fall into their separate sleeps.

Outside, the tracks spread on ahead, leading the sleeper train up into the mountains. Behind, the tracks wind back into the past where somewhere between two wees, the future had been waiting to happen. As it does.

Afterall, the future is only ever the very next moment.

No more than that.

Lucy Cuthew is an editor and author of children’s books. She was shortlisted for the prestigious Booktrust Kim Scott Walwyn Prize for her acheivements as a young woman in publishing. Her picture books have been nominated for several awards. She is currently writing a young adult novel called Horrible Love Story. Her first short story, ‘The Waiting Room’, was published in January. She works from a studio in Cardiff.