The novelist Richard Yates has a remarkable ability to write the most unlikeable, recognisable characters, that are disturbing in their familiarity. They are the kind of people you have met at school, at work, on holiday. The kind of people that you hope you do not resemble, but fear that you do.

Frank and April Wheeler in Revolutionary Road have the same delusions as many ordinary people; an inflated sense of self-worth and intelligence, a preoccupation with how things ‘could’ have been if they had only pursued their dreams, lived dangerously, and become the people they were supposed to be instead of stagnating in a suburban life in middle America. As a woman in my mid-twenties, worrying about the present and the future, preoccupied with whether I have chosen the right career, whether I am ‘fulfilled’ by my daily life, I, too, have worried about these things; felt anxious about the fact that I’m not challenged or stimulated, missed the freedoms and rigorous thought of academic life.

Revolutionary Road opens with a much lauded chapter describing the opening night of an amateur theatre production by the Laurel Players in which April Wheeler has the starring role. In the space of a couple of pages, what seems to be a worthwhile production showing artistic promise descends into a shambolic mess, as the leading lady crumbles along with the rest of the cast. After the dress rehearsal, the director descends into a cliched speech: ‘Maybe this sounds corny, but something happened up here tonight. Sitting out there tonight I suddenly knew, deep down, that you were all putting your hearts into your work for the first time.’ But these hackneyed words are not enough to make a success of their performance. 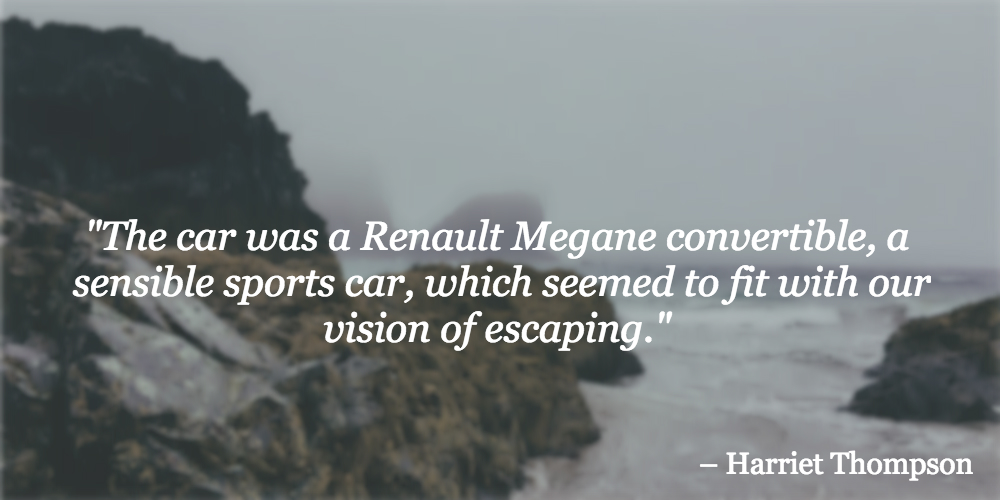 After graduating from university, my boyfriend and I made the decision to move to Cornwall. We had spent over 3 years living in London and thought we were ready for a change. I had written my dissertation on the life-writing of the famously reclusive writer Daphne du Maurier, who had squirrelled herself away in her parent’s house in Fowey when she was in her twenties and had spent the rest of her life in the area, begrudgingly returning to London on rare occasions. Our plan was to move down to Truro (a far less romantic part of Cornwall than du Maurier’s Fowey) and establish a theatre company. We had spent a summer performing in St Ives the previous year and had been seduced by the experience.

We bought a car from an old schoolfriend of mine who was moving to Australia. The car was a Renault Megane convertible, a sensible sports car, which seemed to fit with our vision of escaping and prompted a friend to joke that we were having a ‘quarter-life crisis’. We drove to Truro that September and spent a night in an unusual B&B which had a claw footed tub in its communal bathroom. I had scheduled some house viewings and interviews for front of house jobs at the local theatre. I was serious about moving; my partner wasn’t convinced.

Rather like the Laurel Players’ opening night, this trip was a disappointment. Truro wasn’t the inspiring setting we had hoped for. As we looked around rental properties in the local area, we began to realise just how isolated we would be down here in a far-flung corner of south west England, hundreds of miles away from friends and family, working in minimum wage jobs and struggling to pay rent. Instinct told us that the opportunity to acquire gainful employment in artistic roles was minimal, so we retreated to London with our tails between our legs. Perhaps I should have trusted my initial impulse to move and take a risk.

Is the idea that you can move somewhere and start an artistic group somehow dated and nostalgic? I thought about how the theatre company Forced Entertainment had moved to Sheffield (my hometown) and established themselves after graduating from Exeter University in 1984. They are now one of the world’s most famous experimental theatre groups. Thirty years later, the same didn’t seem possible. We were too preoccupied with looming student debts and the rising cost of living to be able to throw ourselves into the unpredictable life of an artist. Although I auditioned for drama schools during my final year of university, I knew that I wouldn’t actually be able to afford to go.

In January 2014, the Guardian reported on ‘The great migration south’ where ‘one in three 22- to 30-year-olds leave their hometowns’ to move to London. By November of the same year, the headline was ‘Young Londoners flee capital for the regions’ as ‘house prices drive thirty-somethings out to smaller cities’. So, young people in their twenties are moving to London to get jobs and start their career, then moving away when they want to settle down and start a family. This isn’t surprising, in fact it has been the case for many years. My parents moved to Sheffield from London because they couldn’t afford to buy a house in the early 1980s, and not much has changed.

Two years after we flirted with moving to Cornwall, my partner and I are still living and working in London. We still have the car; the last remaining relic of our dream to escape. We haven’t experienced the traumatic suburban doom which Richard Yates reaps upon his unfortunate protagonists in Revolutionary Road, who never fulfill their plan of emigrating to Paris and whose dreams end in tragedy. I still talk of escaping London but have come to terms with when this will be; when I’m one of those thirty-somethings, like my mum and dad were, like everyone else is.

Harriet is a writer and researcher interested in 20th-century literary and visual cultures and life-writing. Born in Saltburn-by-the-sea in North Yorkshire, Harriet has always been drawn to coastal environments. She grew up in Sheffield and is now based in Camberwell.

The DD shop is now closed for the summer. We willl be reopening in September. Dismiss